My earliest memories are of my dad building theater sets in our enormous den while my siblings ran lines, my mother squinting at the script with pursed lips, occasionally snapping out cues or corrections. The air was electric. It was magic.

Our mother was a professional actress in the flourishing ‘60s Houston dinner-theater scene, and once she had kids she got my older brothers and sister up on stage whenever possible. Wishing for more creative control, she started writing and directing children’s shows for us to perform as a family. Every Saturday morning of my early life we would travel around to public libraries and arts centers doing our little song and dance variety acts for kids and their clutching parents. Finally when I was 4 years old I got added to the show.

My first skit was an anti-litter parable.

It was about a bear family and I was Little Bear, a litterbug who is gently chastised by his parents until he sees the error of his ways and the whole audience basks in the aww-cute mid-‘70s smug consciousness of it all. Momma was playing the part of narrator Woodrow the bookworm, who was a hand puppet the length of her arm that she operated from inside an elaborately painted plywood “tree.” My brother Joe was Papa Bear, and my sister Mary K. was Mama bear. (Dad was working in his office that weekend.) I should add that we siblings were all in furry bear costumes, made by Mary K.

Little bear was supposed to misbehave, but…

The skit started fine, but to quote my sister’s recollection of the event:

“Little Bear was supposed to misbehave, but then there was supposed to be an END to it. Instead, the laughter of the audience was absolutely intoxicating to little Byron and he lost his marbles. He raged around like a maniac and ripped the newspaper Papa Bear was studiously reading right out of his hands with a big vertical right-in-front-of-his-face nose swipe and ripped it to pieces, throwing the shreds around the room. Poor Momma was helplessly raging behind the puppet stage, with Woodrow busting a gut bellowing “ Lit-tle Bear!! Lit-tle Bear!!!”, his puppet mouth opening as wide as Momma’s furious hand could reach. Feeling his power, Byron laughed with deep gusto and exhilaration and ran in front of the seated children, all now breathless with shock and wonder and delight, and with a full-body straight-arm circular gesture straight from vaudeville, shouted his irresistible invitation, ‘Come on, let’s GO!!’ The entire audience erupted to the revolutionary call, and he led the population in a roaring, shrieking, leaping parade around the room. It was a magical theatrical event. Woodrow/Momma never stopped bellowing for order, but I remember riding it out; there was no quelling the uprising. Eventually the crowd was reseated on the carpet, chests heaving and eyes sparkling, exalted with wonder at having been part of the ecstasy, and we picked up the story where we left off, completed the show, and saw our charges out with their parents. As soon as the door was shut on the last little one, I turned and without comment removed one of my ballet slippers and began beating Byron with it, which of course made a delicious whacking sound and didn’t hurt at all. He dutifully covered his head with his arms but the penitent effect was offset by his laughing the whole time. Momma’s fury was less funny, but tempered somewhat by her admiration and celebration of his abilities with a crowd, however capriciously that power might have been wielded.”

Eventually I learned the perils of hamming.

But man, that was a hell of a rush. I never would’ve guessed I’d grow up to be a musician—through age 15 I was still dead-set on acting—but I think we all knew early on that I was destined for a life on stage.

Me at Little Bear age, with cousins Paige and Melinda and my older brother Joe, aka Papa Bear. 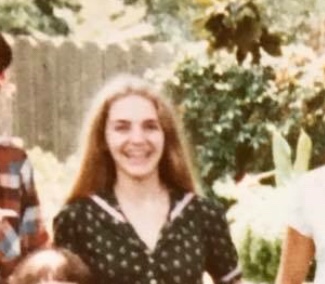